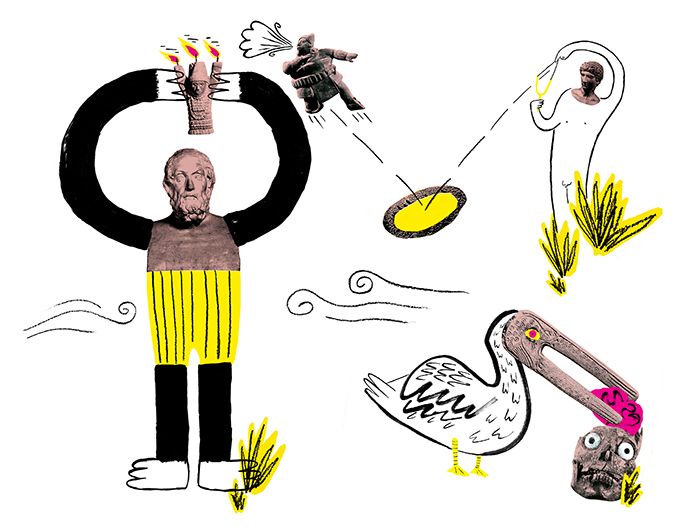 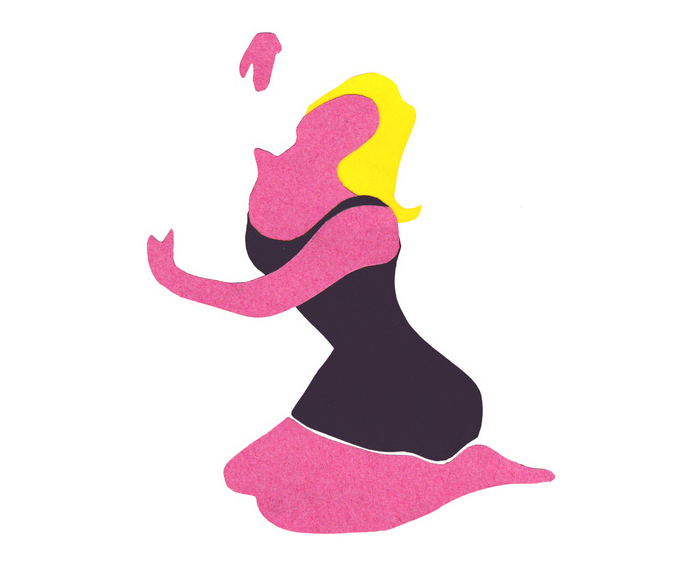 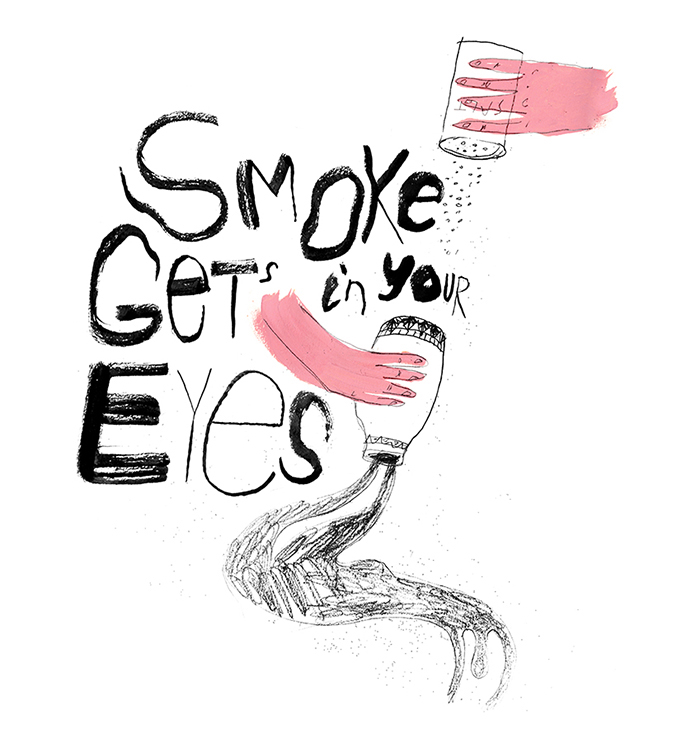 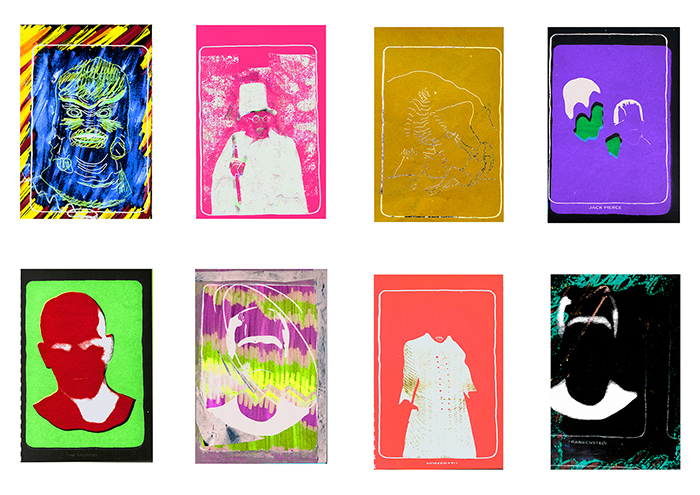 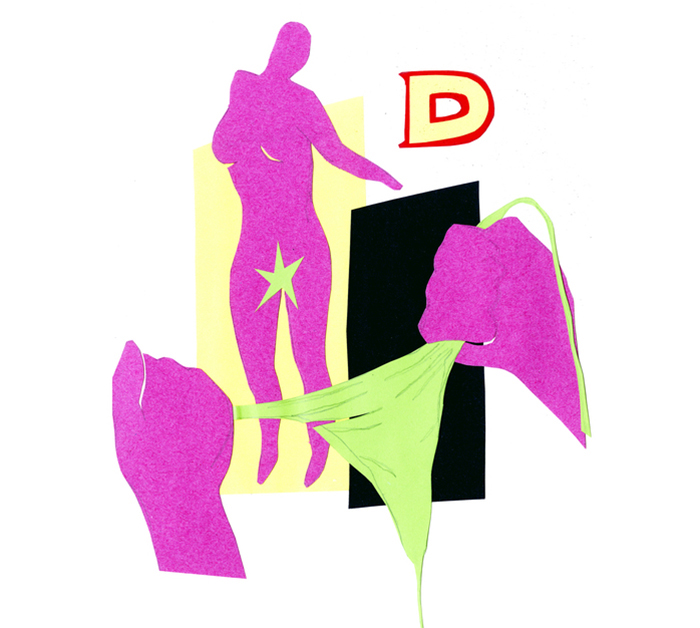 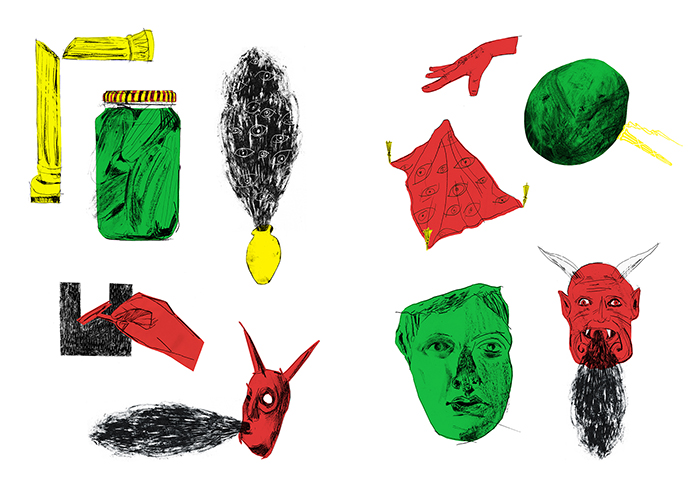 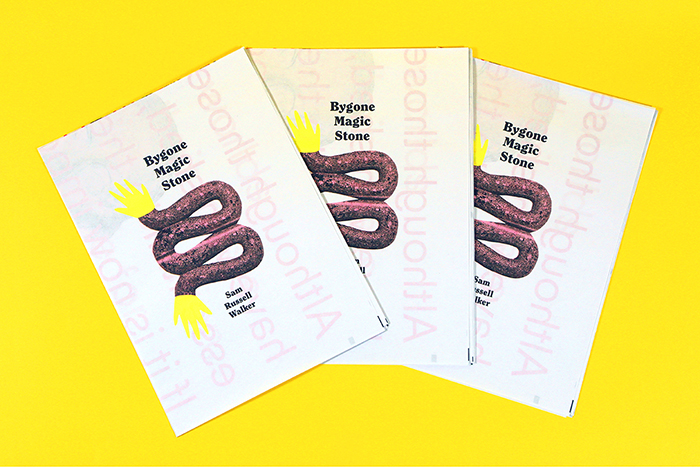 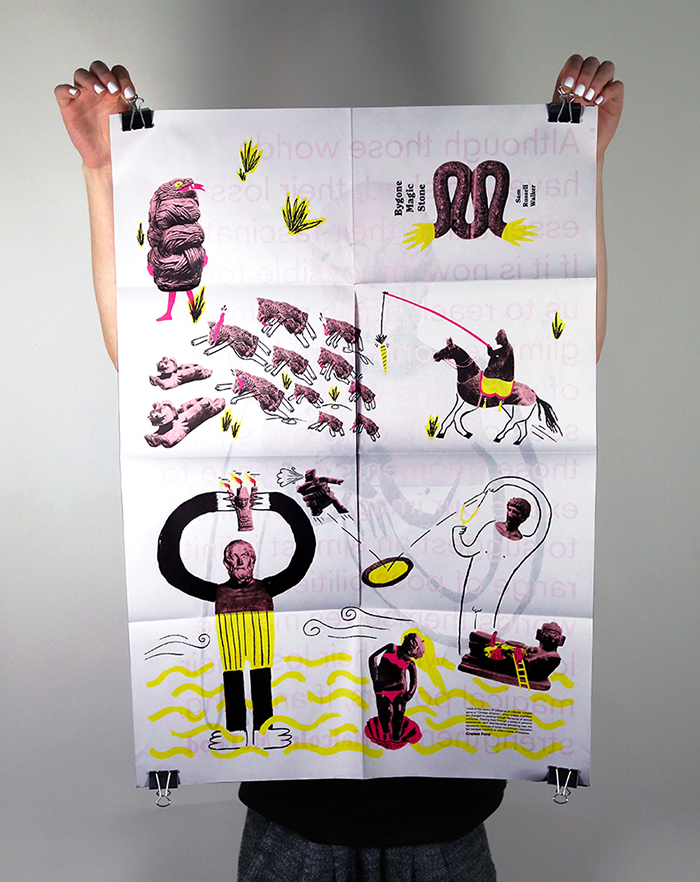 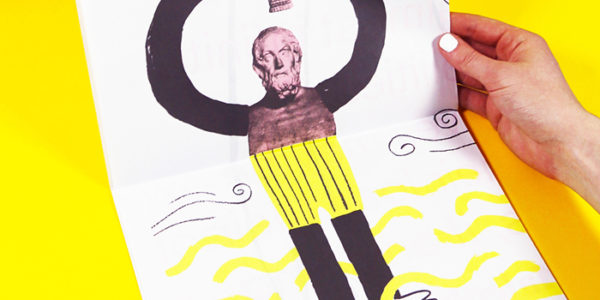 A recent graduate from Glasgow School of Art with a BA (Hons) in Communication Design, Sam’s “Bygone Magic Stone” project – a double-sided poster based on the idea that each generation look to their predecessors for inspiration – was one of our top picks from the GSA degree show.

Sam’s work relies heavily on research, as he throws himself into the subject matter for each project, seeking new worlds to portray in his distinctive and unusual visual style.

Tell us a little bit about your practice so far – have you taken much client work yet?

I’ve been pretty focused on trying to find myself and the way I enjoy working, which I feel I’ve only just found in my final year at Glasgow School of Art. GSA has such an exciting yet easygoing atmosphere, so you’re never afraid to try, fail and then try again. Pushing yourself to find you’re own unique path. My next steps will hopefully be to get some real life experience, so I’m eager to get a career started. I also wouldn’t mind a few collaborations along the way also. I love to work with others, especially working with others from different disciplines as I find it is really enriching to your own practice.

What aspect of your course have you most enjoyed?

I’d say the people. As my course title is Communication Design, I shared my studio space not only with fellow illustrations students but photography, and Graphics students as well. Therefore, everyday felt exciting, as there would be so much going on. The mix of people and talents made for a strong sense of community amongst all 43 of us! We’re like one big family and it made my time at art school really enjoyable and diverse. Being surrounded with such talented people with diverse skill sets really lit a fire underneath you and gave you the drive and passion to experiment and try your hardest. It also meant that you got a lot of great and varied advice about project work so you learnt not to only look at it from your own perspective but try and see it from many.

GSA has such an exciting yet easy going atmosphere, so you’re never afraid to try, fail and then try again. Pushing yourself to find you’re own unique path.

We really enjoyed your Bygone Magic Stone poster at your degree show. Can you tell us a bit about the project and the inspirations behind it?

Thank you very much! Yeah that project was a funny one, it was meant to be the start of a project based off of research I had done about death rituals from around the world and through time, but it kind of grew into its own thing. I began by scouring library books for any artefacts or objects from ancient civilisations with the intention of photocopying and collaging them in some manner. Around this time I also began to research Grayson Perry’s exhibition ‘Tomb of the Unknown Craftsmen’ in which he placed his own work alongside objects from The British Museums archives, to create a new fantastical history.

In the accompanying book for his exhibition, Perry talks about how the creation of objects is like a large game of Chinese Whispers. With each generation taking the objects that came before them and projecting their own interpretations and associations onto the objects in order to create a new set of objects for the next generation to interpret and make anew. It is with these ideas that I decided to take my photocopies of ancient artefacts and cut them up and draw into them, interpreting them in my own way. Creating images, based on initial thoughts and connections to the images in front of me I choose to keep a loose style utilizing collage and a brush pen, (I found this to be quite freeing as in the past I’ve found myself quite detail orientated) in order to create quick and playful images, that didn’t take themselves too seriously.

I feel that it allowed for quite a fun and relaxed outcome.

As well as your degree show in Glasgow, you have also taken the exhibition to Shoreditch in London.  How did it go?

The show was great fun and went really well, the venue was a lot smaller than our studio space in Glasgow so it made for a more intimate exhibition. People had to scale down but everything was still as exciting and energetic. I spoke to a couple of people but not too many. From what I heard people liked my illustration work, which was nice to hear! The trip was great for topping up on some much-needed sun and vitamin D though, you don’t get much of that in Glasgow.

Creating images, based on initial thoughts and connections to the images in front of me… I choose to keep a loose style utilizing collage and a brush pen.

Tell us more about your Shroud project; we understand that before producing your final pieces, you spent a year researching different death rituals from various cultures through time? What was the most interesting ritual you discovered?

Ah, there are so many fascinating ones to choose from! One that I still want to create work based on, is a Japanese cremation ritual called, Kotsuage. This ritual takes place after a deceased family member is cremated and then their bones are removed from the cremation chamber and laid out on a table. Each family member is then presented with a pair of chopsticks and each individual has to – starting from the feet working their way up to the head – pick up the bones and place them in an urn. For bones that are too heavy to carry alone, two family members use their chopsticks to carry the remains to the funerary urn. In Japanese culture when two people pick up the same object with two sets of chopsticks it is seen as a major social faux pas.

I’m not entirely sure why I’m drawn to this ritual as I’ve spoken to friends about it and there initial reactions are along the lines of “Eww, no way…that’s gross!” but I feel that’s the way we’re made to see death in western society. Western Society is made to cover up and hide from death, creating a death phobic society.

So you could see the Japanese bone collection ritual as a way of accepting death by confronting it both mentally and physically in order to move on and have peace. I guess I like the idea that this ritual stares mortality and our own materiality in the face and just gets on with it, I find that fascinating.

How has your style evolved? Was there a lot of trial and error involved in coming work in this was or has it always been the way you created work?

I think that it’s just kind of developed overtime, it has definitely changed a lot over the course of my final year at art school. I think in my 4thyear I’ve learnt to let go and relax a bit. Which has lead to projects like ‘Bygone Magic Stone’ and The Shroud. I feel like those two projects have shown the restraint I’ve learnt to apply to my work in order to create bold and eye-catching work that doesn’t feel overworked.

Ultimately, I feel like my illustration style is an amalgamation of all the projects I’ve worked on through the years. Boiling down to a mixture of collage and pencil work which I sometimes take into Photoshop, so I guess it’s sort of become a traditional-digital hybrid (but mostly traditional)

I think the key to creating confident work is to stay relaxed and not doubt yourself. Just keep going and experiment, then I feel you’ll always get some pretty good results!

Do you take day trips or travel often? How does this fuel your creativity?

I really need to get out more, I haven’t been on any trips in ages! I love exploring new places, but haven’t really done it in a while, I definitely want to go travelling soon. I feel like reading about so many cultures and their rituals has made me want to go investigate them first hand. So maybe sometime in the future I could do that, influencing a project or two along the way.

What role do visual journals play in your work?

I often work on loose sheets as I get freaked out about the idea of a sketchbook. But that may be from the fear of assessments at art school. I feel like your initial ideas and sketches are quite personal so I’ll probably start to keep sketchbooks now that they’re not getting scrutinized as part of grading. They can just be for me to figure stuff out just now and maybe later they’ll become more of a thing within my way of working.

I do however keep a tumblr full of images as a sort of visual diary of things I like aesthetically or things I’ve seen that spark ideas for work. I’ve found doing that has helped me a lot when creating work and is good to reference, allowing for my work to be influenced by so much more than myself.

Tell us about the last book you read or documentary that you watched – is there a subject matter interests you most?

The Last book I read is called, “Smoke Gets in your Eyes and Other Lessons from the Crematorium” by American mortician, Caitlin Doughty. I read this as part of research on death rituals but enjoyed the book so much that I approached my fellow classmate Steph Roden (Graphic design) about re-designing the book and creating illustrations for it. The book is a really great read and is really eye opening to the death-phobic ways of western society. It really helped shape my understanding and current opinions on death and helped support my ideas when making the silk burial shroud for my degree show.

The last documentary I watched is called “Going Clear” and is an extremely in depth HBO documentary about Scientology. I’m fascinated by all things mysterious or secretive, such as cults, secret societies, the occult, etc. So it was a good watch! 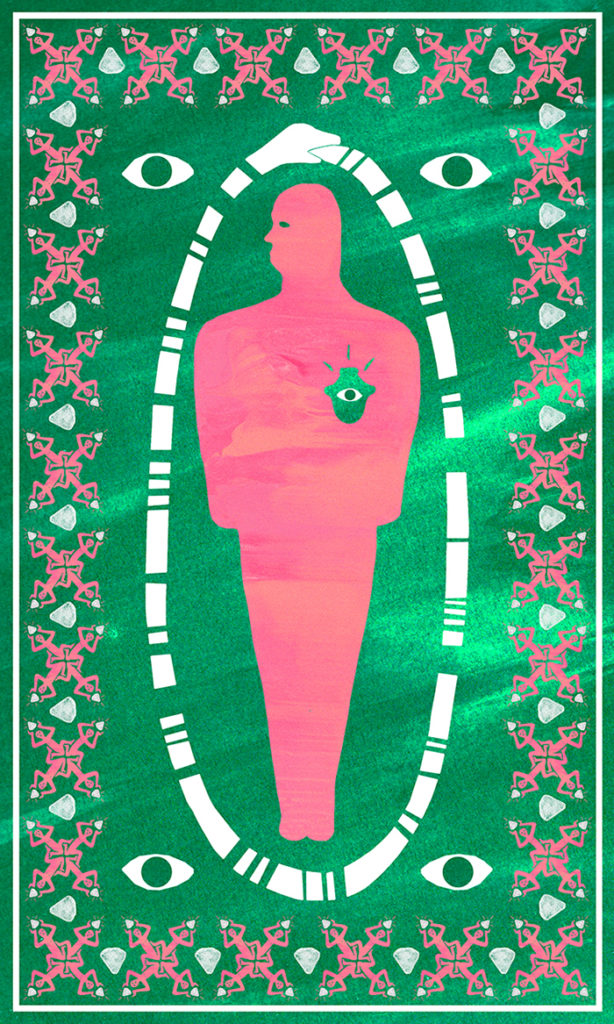 Are there any creative projects out there that you’ve seen recently that you wish you’d made?

I’ve always been a massive fan of Grayson Perry and ancient artefacts, so feel that the “Tomb of the Unknown Craftsmen” project he did at the British Museum would’ve been amazing to do. Handpicking museum artefacts to showcase alongside your own must’ve been an amazing opportunity. Also that house he just built in Essex was beautiful. I’m a big fan of people who can completely fabricate their own world out of the top of their heads.

Can you tell us about your inspirations? Who are they and what do you like most about their work?

I’m a massive fan of Matisse’s paper cutouts work, the way in which he completely changed his way of working at such a late stage in his practice is amazing. I also find his confidence in ‘drawing with scissors’, to cut out large-scale shapes of vivid colour, to be completely awe-inspiring.

I also really enjoy the work of Luke Best, I find his use of collage, drawing mixed with his use of digital collaging really unique and exciting. His images are always bursting with character and there’s always so much to look at, whether its colour, texture, pattern or shape!

Finally, what would you most like to be doing with your illustration work in a few years time?

I’d like to have my finger in many pies I think. So, doing exhibitions, collaborations, working with others from different creative fields, large-scale projects, have my work featured in publications, etc. Who knows, anything and everything will be great! I want to be kept busy and eager to create!