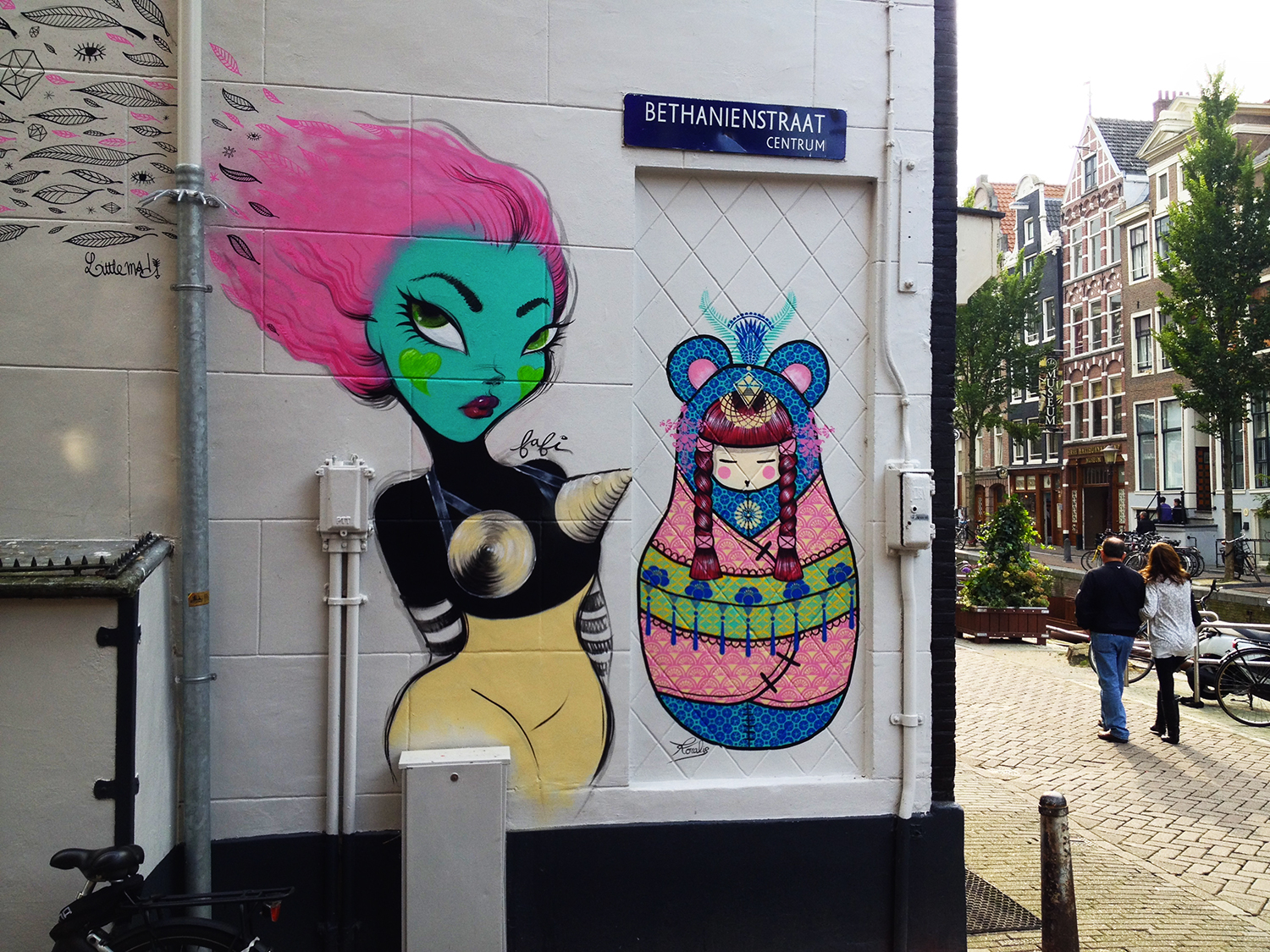 The Jaunt combines art and travel, sending artists all over the world to soak up culture and gather inspiration.

Last year, we interviewed Jeroen Smeets who told us of his ambitions to create a book to celebrate the project. Twelve months on this dream has become a reality with The Jaunt’s first book set for release later this month.

The book will mark The Jaunt’s tenth trip and include work and words from all of the artist who have taken part in the project since it started last year. These include Mike Perry, David Shillinglaw and Jordy van den Nieuwendijk, all of whom will have their final works as well as sketches, photos and notes from their trips displayed within the book’s pages.

2014 has been a huge year for the project. Not only have they collated a book but they have also had their first exhibition with Mike Perry and just last week they had their first trip to Asia as Raymond Lemstra travelled to Seoul in South Korea.

We are huge fans of The Jaunt and can’t wait for the book’s release. Earlier this month we caught up with Jeroen find out more about the book and how 2014 has been for him…

Combining all of the trips – the sketches, the end results, the photos and stories [I thought] would make the best travel book ever!

For those who missed our first interview, remind us about the motivation behind the project – what made you decide to fuse travel and art?

The original idea all started with the fact that I kept noticing artists mentioning their desire to travel. Mostly as an instigator for wanting to find new inspiration. This stuck with me, and I tried to think of a way to combine travel and art in a unique way. A project that would enable the artists to actually travel the world and finding new inspiration. I should have kept brainstorming about the project and figure out a way for myself to join on the trip, in stead of always booking tickets for other people. All good though. I love seeing the trip from the artists through their eyes, and think I would only disturb the creative process if I were to join on the trip.

How did the idea of a book come to you? And what extra insights will it give?

The book was actually something that I always kept in mind. I’ve told each artist to keep all the photos they took on the trip, and save all of their sketches, for hopefully to use later in any kind of way. During the summer of 2014 I decided it was time to start working on a book, as our tenth trip was coming up and that seemed like the right moment to bring it all together. The book will feature exclusive interviews about the creative process from the artists, and how they experience the trip but also the project on itself. Combined with unpublished photos and sketches it provides a real behind-the-scenes look that you won’t be able to find anywhere else.

Can you tell us a little about the structure of the book and what we can expect to find inside?

The book consists of twelve chapters in total. Each of the artists have their own chapter giving all the details of their experiences and of course the final result of their trip. The last two chapters are interviews with myself, and Joris Diks, the master printer of the project. This will provide some more insight into the concept of the project, and the work process of our project once the artists returns back home again.

The book marks 10 trips for the project. What have been you best bits? When it started, did you think it would go so far?

We started with our first trip in April 2013, and it was sort of a beta-launch. I had only communicated the project to friends and family of myself and the artist, Hedof. I had no idea what to expect, but the response was overwhelming. Everybody was really excited about the project and our first trip sold out within three weeks. After that I kept expecting a backlash, but we have grown steadily and have been lucky enough to sell consistently 30 prints or more of each trip, and the last three trips of the project have all sold out. Now I’m really curious to 2015.

This year has been a great one for The Jaunt. You have had your first exhibition, first trip to Asia and now first book. What have been your personal highlights?

I keep telling other people that the biggest highlight so far is that we haven’t missed any flights yet. It’s bound to happen at some point, and I keep expecting it to happen any moment. One of the highlights for me was our eight trip with David Shillinglaw who traveled to Denmark and stayed at a summer house of my family.

Together with my girlfriend we hosted David here for 5 days while showing him the area and telling him stories of my girlfriend’s grandparents who built and designed the house themselves over 30 years ago.

It was very special for me to witness the creative process of an artist on a trip first hand, as it was the first time I was present during one of the trips.

What is next for the Jaunt? You have achieved so much already with the project, do you have any goals for 2015?

For 2015 we are organizing a total of 8 trips, which is two more than this year. We have the first three trips booked already, and are talking with a bunch of different artists about the other trips. We’ve got some really exciting destinations and artists coming up, so I hope it’s going to be another great year. There are wild plans of a whole merchandise collection of all things travel related, throw away tooth brushes, bathrobes, sketchbooks, sleeping masks and whatever else you would need or not need during a trip. That would be fun.

The Jaunt’s first book will be released on the 13th of December and is available for pre-order now.

Headless Greg is the pseudonym of Scottish illustrator Greg McIndoe. Often found hunting for creative ideas and inspiration online and in books and magazines, he joined Inkygoodness in 2014 as a regular columnist.