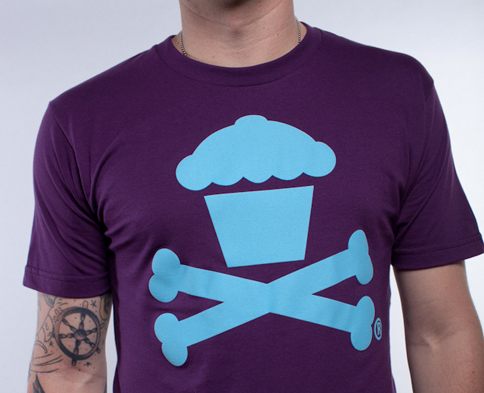 [OFFF16] In Conversation with Johnny Cupcakes

Johnny Cupcakes is a cult clothing brand founded in 2001 by Johnny Earle.

Over the past decade the business has grown into a multi-million dollar, highly exclusive t-shirt brand, generating $4 million in revenue selling T-shirts, hats, and cut and sew clothing, as well as novelty items like playing cards and scented vinyl toys, with success driven by a community of world-wide collectors.

As part of our series of features about upcoming OFFF16 speakers, we take a closer look at Johnny Cupcakes and his inspiring, and unpredictable journey.

“As a little boy, I would see my parents spend so much time in traffic commuting to and from work. This inspired me to be an entrepreneur with the hope that someday I could work and still be able to spend time with the people I love.

Despite having learning difficulties combined with the inability to sit still and concentrate, when I did discover something I realized I had a passion over, I obsessed over it. That particular passion was being an entrepreneur.”

“From lemonade stands to performing magic, I had sixteen different businesses before I was sixteen. I knew I had that entrepreneurial spirit, especially when my friends hung out with cute girls at parties, I hung out with cute old ladies at Joanne Fabrics, where I started a fleece scarf business.

After graduating high school and taking a short break from college, my friends and I started a hardcore metal band. I also scored a job at Newbury Comics, a local record store where my co-workers awarded me with random nicknames.

Anything goes well after Johnny, including ‘Come-Lately’ if I was late to work. The nickname that stuck was ‘Johnny Cupcakes.’ While I was making a t-shirt order for my band, I thought it would be hilarious to get a few with my new moniker. I wore one to work, and the word spread like wildfire. Everyone wanted one!”

A food themed clothing brand was weird to many people, but weird is good! More than anything, it made people smile.

“A food themed clothing brand was weird to many people, but weird is good! It gets people talking. I started making more Johnny Cupcakes t-shirts that poked fun of pop culture, replacing known references with cupcakes. One particular logo, the one most identifiable with Johnny Cupcakes today is a cupcake with crossbones. Guy’s thought it was funny and girls thought it was cute. The design caused curiosity and conversation amongst strangers. More than anything, it made people smile.

I started selling t-shirts out of the trunk of my beat up ’89 Toyota Camry. Then out of my crusty suitcase while on tour with my band On Broken Wings. People all around the country began to purchase them. Before I knew it, my Johnny Cupcakes t-shirts caught the attention of so many people, and making them quickly became my passion.

Instead of playing loads of video games or partying like most or my peers, I chose to spend my time and money building the foundation of my new independent clothing line, Johnny Cupcakes.

I took a risk by quitting my day job and my band, as I knew launching this brand would require 100% of my energy.

As I spent more time on the clothing line, it grew so much I had decided to re-launch my online store. Slowly but steadily a cult following was brewing so much that my entire house became filled with orders to be shipped internationally.”

“My whole family became involved, my mom and sister helped fulfil orders while my dad created a storage space in the attic. After hiring friends to help out, the only logical thing to do next was to open a retail store.

When it came time to open a store, I really wanted it to be an unforgettable experience. My dad and I transformed my first store location into an old fashioned bakery where I displayed t-shirts in vintage, industrial refrigerators and on baking racks. I even made it smell like frosting! This is and always has been the model for all of my stores. Even when you purchase a t-shirt, we package them in our signature pastry boxes.

Keep positive and do more of what makes you happy!

My inner-jokester still gets a kick out of fooling hungry shoppers. Cupcake or not, customers usually leave with a t-shirt or a great story.

I’ve always taken my advertising budget and put it into building unique experiences through our products, packaging, events, and retail environments. By doing this, people end up doing the advertising for us through word of mouth. Through the unique nature of the brand, we’ve been featured in press outlets that I would have never imagined in my life!”

“We’ve hosted movie nights for our customers, dodgeball events, charity events, scavenger hunts, in-store performances with musicians, haunted houses, barbecues and pizza parties. I have started to engage with my customers on a personal level with the use of social media. I’ve tweeted my location, announcing, “Show up at this ice cream shop with your Johnny Cupcakes t-shirt on, and I’ll treat you to dessert!” It amazes me to see hundreds of fans come by. I continue to run these experiments when I travel. Fans camp out for weeks for limited release items or they are excited to show off their JC tattoo. To this day, I’ve seen thousands of loyal customers around the world with my brands logo tattooed on them!”

Johnny joins the line up for OFFF16 where he will share his story of how he took his t-shirt brand from the trunk of his rusty car at age 19, with a learning disability, to some of the world’s most sought after retail locations.

Through his inspiring, and certainly unpredictable journey, Johnny exudes the fundamental connection between the person and the brand.

Inkygoodness are one of the official media partners for OFFF16 Barcelona, May 26th – 28th, 2016. Tickets are now on sale.

In Focus: Owen Davey for The Leisure Society